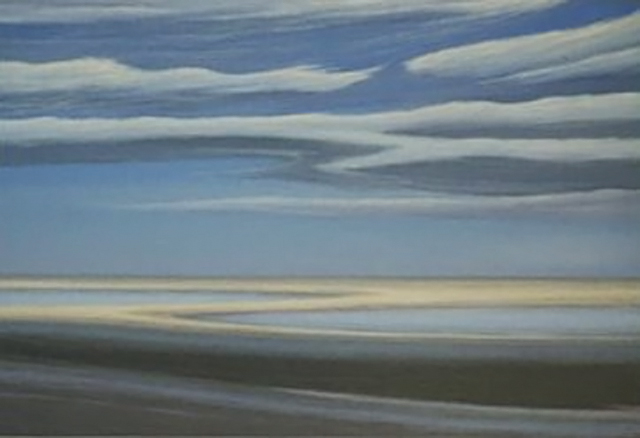 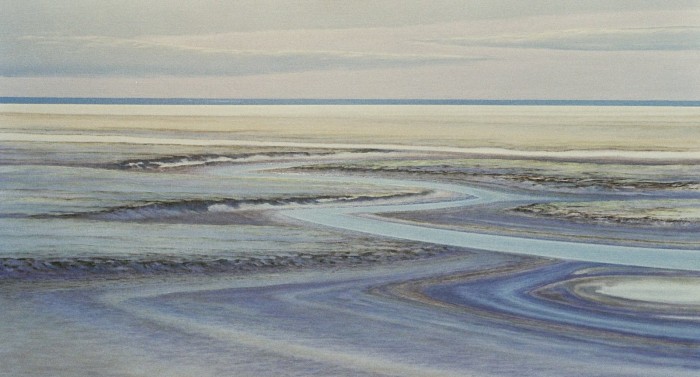 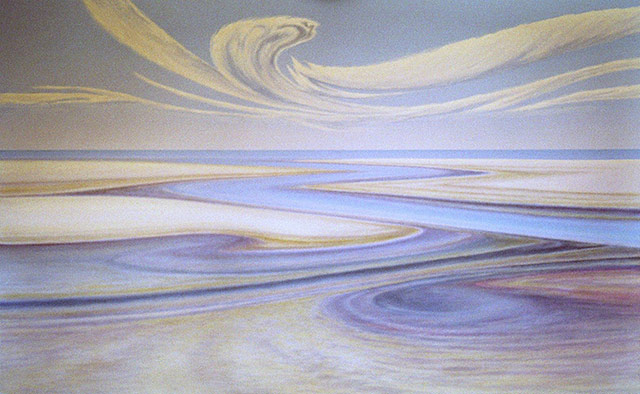 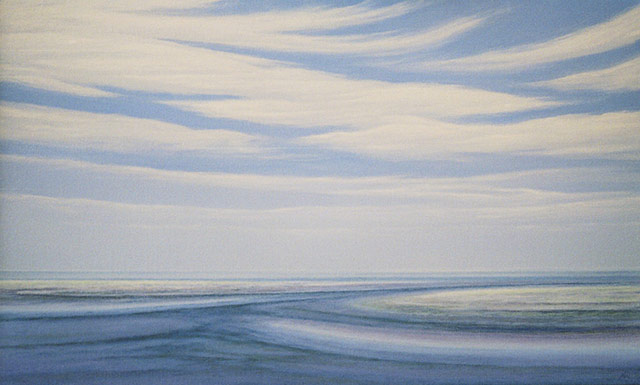 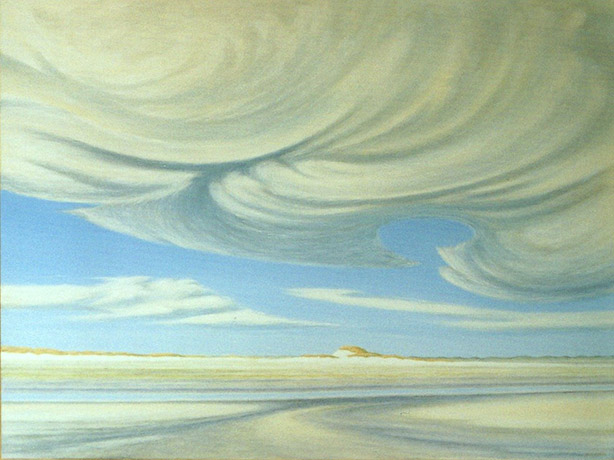 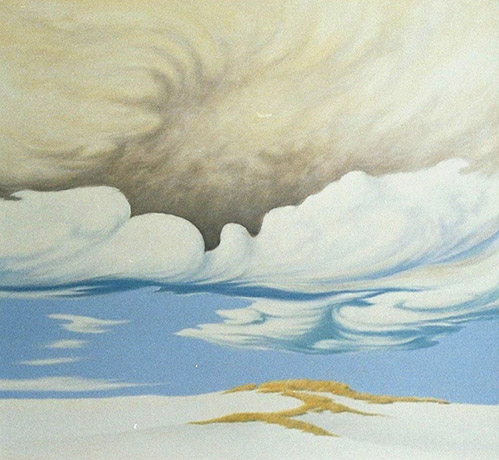 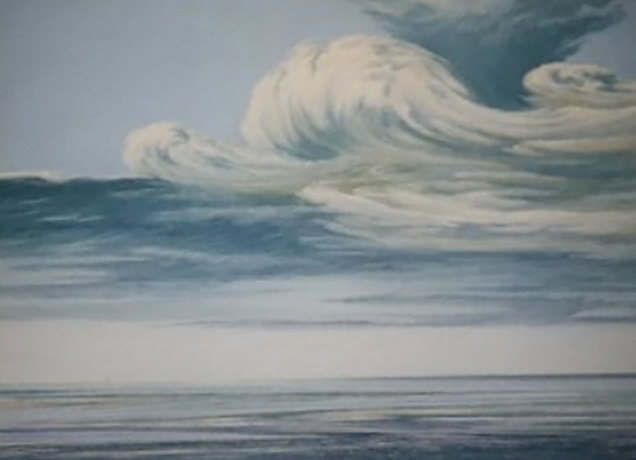 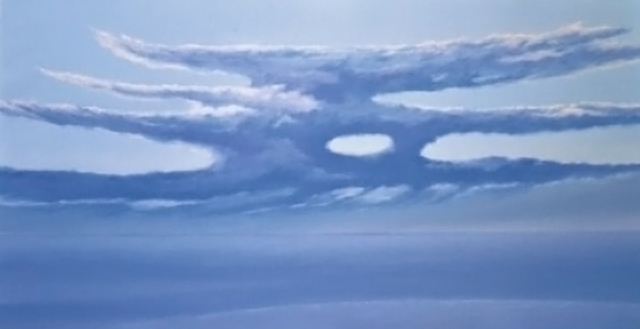 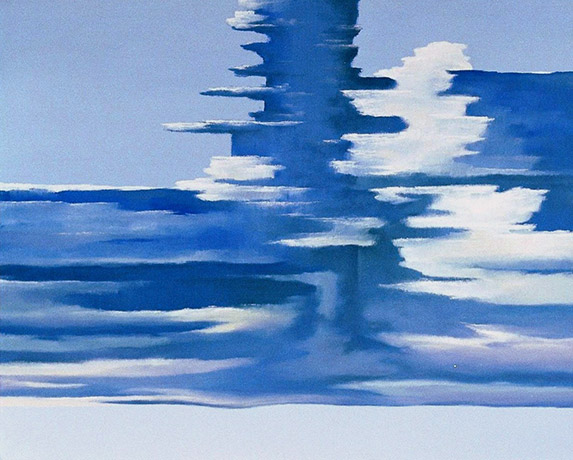 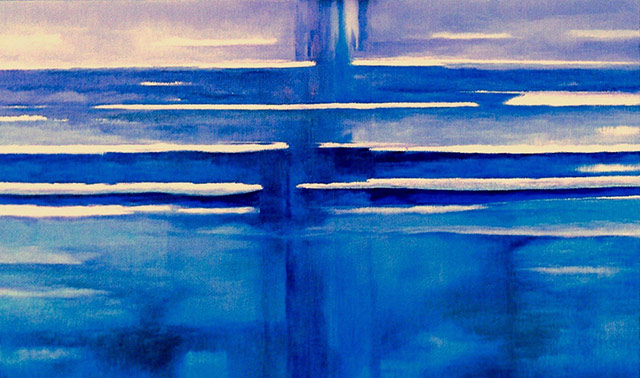 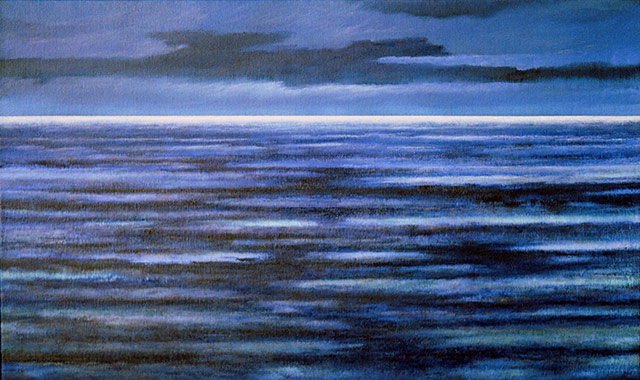 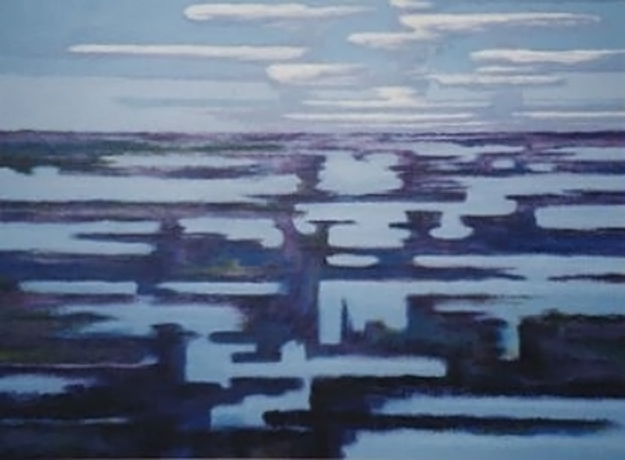 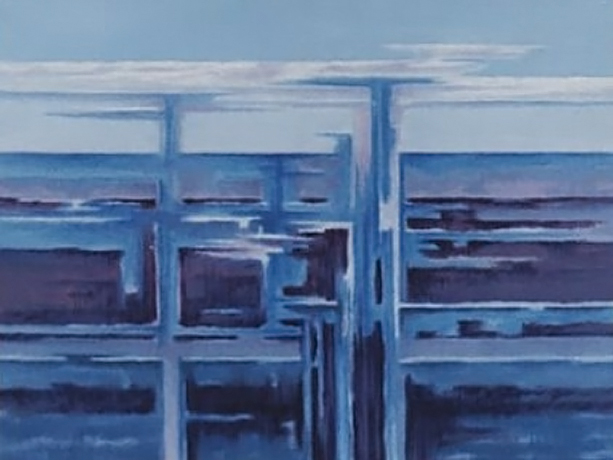 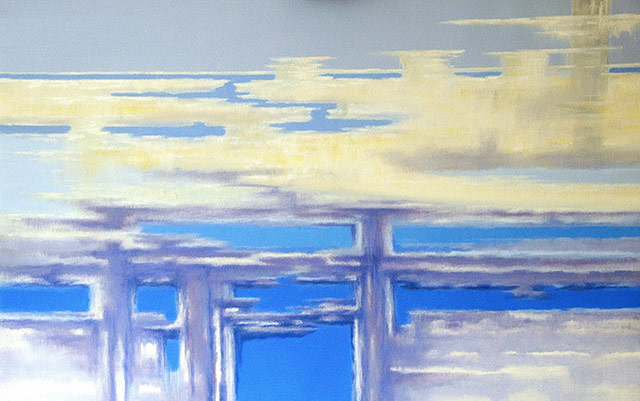 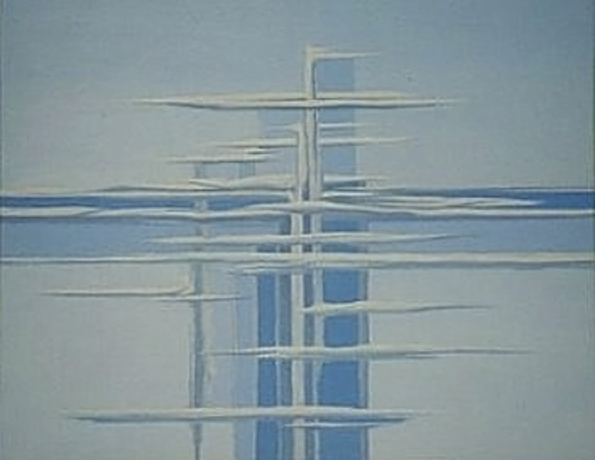 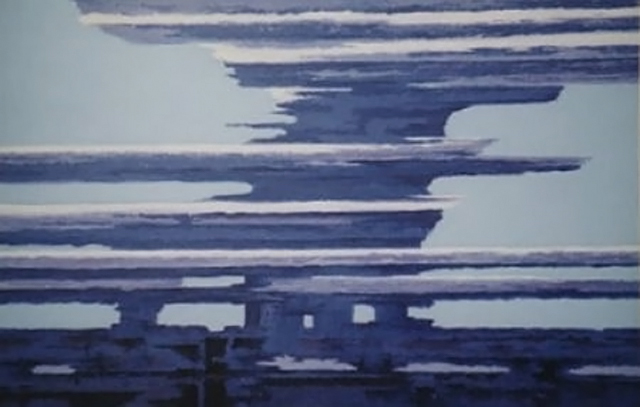 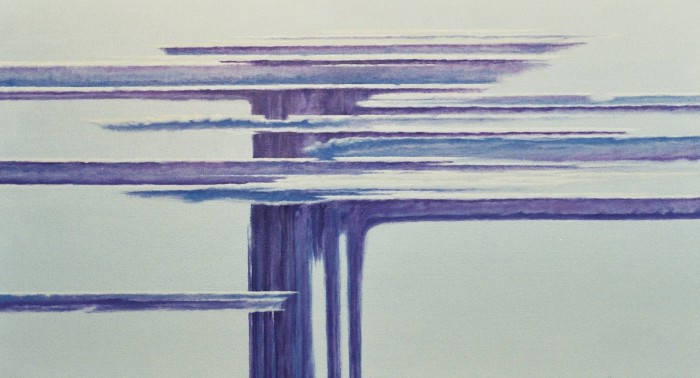 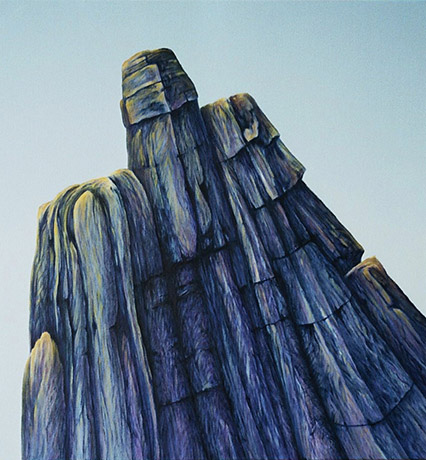 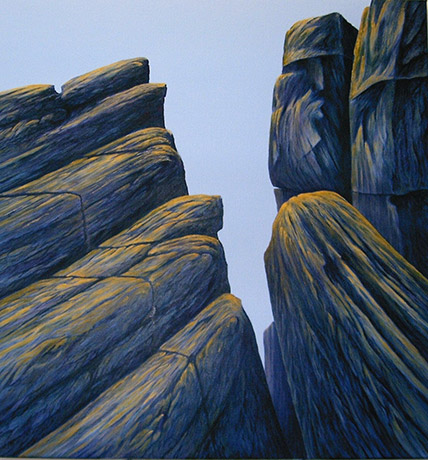 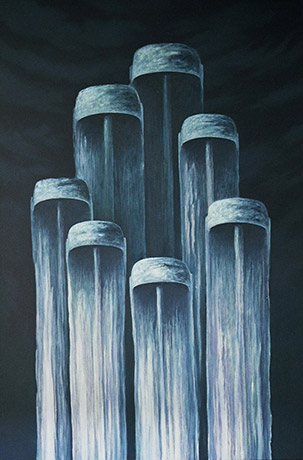 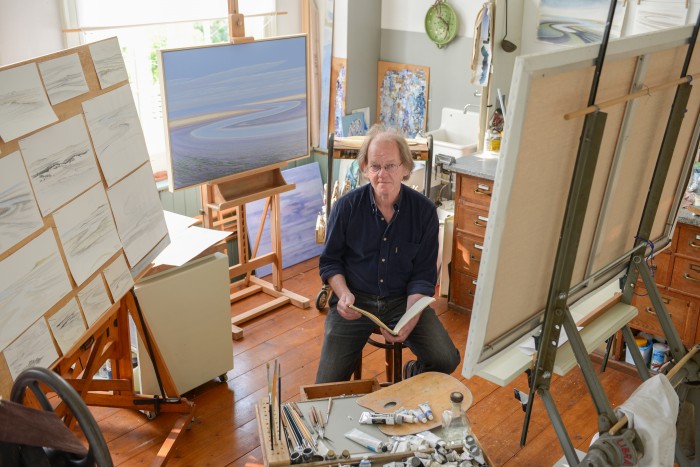 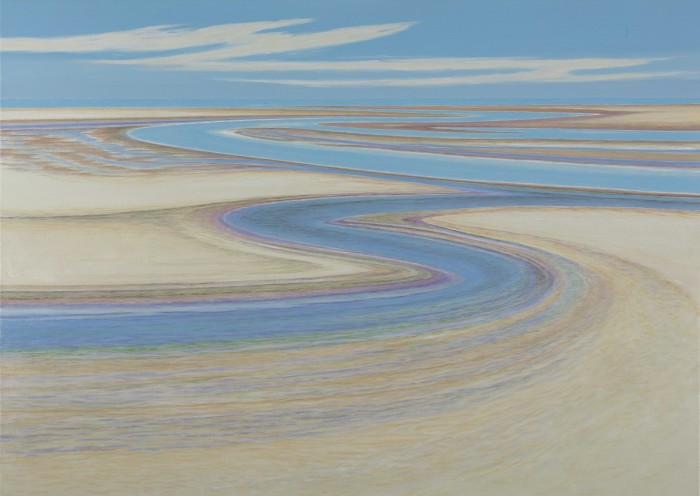 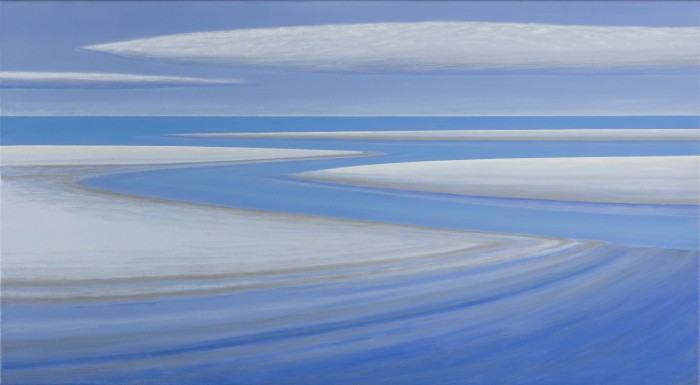 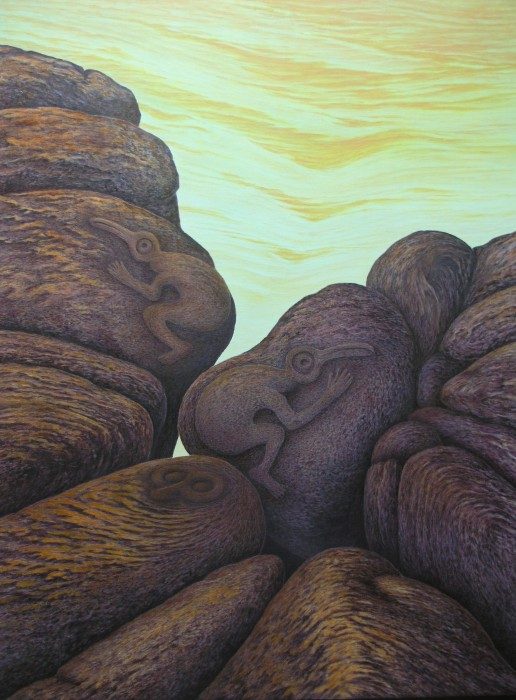 Painter and draughtsman Niek Welboren was born in Den Helder in 1946. Since 1954 he has lived on the other side of the Marsdiep on Texel. From a young age, Niek clearly showed his creative talent(s). Under the eaves of his parental home, he created his own “Art studio” and imagined a future as an “Artist”. At the age of 12, he proudly sold his first ink and watercolour drawings from the doorstep of his father’s bookshop in Den Burg. He was encouraged and dreamed of a course at the “Craft School”, by which he meant the Art Academy…

He later also daydreamed his way through school, wasting his opportunity for an education. He started work as a window-dresser/decorator. At the same time, he independently developed further as an artist with a romantic sense of the Texel scenery. He marketed a series of cards of his detailed pen drawings.
In 1966, he exhibited his drawings, watercolours and a few oil paintings for the first time, together with another young islander in Den Burg. 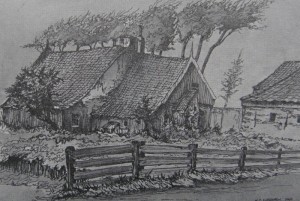 In 1968 Niek settled in Oudeschild, where, in a small ancient fishing house, he set up a simple print shop selling his own work. Once again, a number of drawings of the Texel landscape were brought into production for selling. In the little historical house by the dike, his characteristic miniatures were born. As a creative self-employed individual, he earned his income by designing logos, lettering, screen-printing, displays for shops and fairs.

In 1975 Niek took the decision to fully concentrate on painting and to finally commit to being an “Artist”. From that point forward, he wanted to be independent and live for the Arts. He also wanted to be able to survive from his art, and to do this with awareness without the use of governmental subsidies. He exhibited his imaginative and free-style work again in Den Burg.
Having grown up on the confined island of Texel, a strong desire arose to broaden his horizons and discover other possibilities. Travelling to Great Britain refreshed his motivation and provided new inspiration. A longer stay on the island of Mull off the west coast of Scotland gave renewed impetus and resulted in a surprising series of fairy-tale-like drawings and watercolours. A new dream was born… 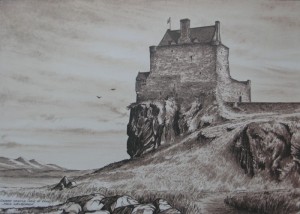 In 1978, Niek moved – not to the other island in the end – but to the Eierland polder on Texel. There he saw the ultimate potential to flourish as an artist. With his own hands, he re-built the former neighbourhood school of Zuid-Eierland into an art studio, exhibition space and living area. The large building, the spacious new well-lit studio, and the expansive surroundings would be of great influence on his life and work.
The extensive renovations of the old building and grounds began to take up increasingly more of his thoughts and in the end became the determining factor over
his artistic output. ‘Being creative’ took on new implications, and little time was left for working in the dream studio.

Over the years, the term “Craft School” took on a whole new meaning, and he began
to wonder more and more: “Should I be a painter, or can I be an artist with verve?”
In order to escape from the stresses of his own creation, Niek went to Scotland regularly. He was and remains fascinated by stone and the basalt formations on the island of Mull. For him, rocky coasts are an interesting contrast to the flat polder and the sandy beaches of Texel.
In 1992, Niek sought contrast on another special island. He stayed on Easter Island in the Pacific Ocean for an extended period, fulfilling another childhood dream. He also wanted to give meaning to the forgotten, and for many unknown, connection between Easter Island and Texel. On the mysterious island, Niek made 85 imaginative drawings and returned with a head full of stories. The overwhelming impressions of this trip as a “Painting Ambassador” will long continue to influence life and work, especially with a “Moai” in front of the door! The statue, which was made on and for Texel by a sculptor from Easter Island one year later, has given the connection between the islands permanent stature.
In 1994, a stimulating new phase begins in his – up to that point solo – existence. Kerstin Edelmann, who he had met in 1990 on the small island of Iona near Mull, comes to Texel to share her life with him and develop her own skills as a ceramic sculptor. Since then, Niek has been yet further motivated to continue to beautify and restore the historic building. The (sculpture) garden, which he had already given form to, could now be designed together, and laid out for the presentation of ceramic objects.
Islands and the surrounding waters form a – blue – thread in the lives of both artists.
To celebrate this impression and their combined new direction, the new name “Eiland Galerij” was introduced for the culturally destined building.

The Eiland Galerij as own exhibition space (at the time, the first on Texel) has contributed to the fact that Niek Welboren’s work is not often to be seen off the island. He has had a few solo exhibitions including those in Brampton (UK), Hilden (Germany), Rijnsburg and Den Helder. Despite the limitations, but also thanks to the advantages of his natural and privileged living surroundings, Niek Welboren has been able to artistically evolve in his own way.
His work is pure and original.
As a painter, he has developed his own visual language for his, often abstract, island and coast impressions. Increasingly, Niek’s work is about translating the landscape experience and the scenery’s essential characteristics, and no longer, as before, about precise reproduction.

Niek Welboren is an experienced drawer and his pre-studies and painting ideas are usually first done the “old fashioned” way with pencil and paper. Endless notes and small sketches, of sometimes rapidly changing moments are done before his larger works on canvas. He ponders themes or impressions for extended periods, and sometimes a number of years pass between the first sketches and the later progressions.
He has worked as renovation designer / decorator for many Texel companies and institutions, and his designs and ideas have been used in printed works and other presentations. His work is clearly recognisable and can always be seen around the island.
Niek’s detailed drawings and miniatures have also been used for book illustrations.
The drawings, watercolours and paintings were and continue to be mainly bought by private individuals: on the doorstep, in the shop, and since 1978 in his own exhibition space. His works have spread from the island, over land and even far across the seas.

Niek Welboren has realised his dreams on the island of Texel, but he is definitely not finished! In, at and through his own “Craft School”, he has been able to grow as an artist. He paints with verve, and over the years, he has also become a skilled decorator.